A brief interview about the ACTION CELEBRATION hardcover I edited went up on PW. Check it out.

Over the winter break, Newarama‘s Vaneta Rogers published a 4-part interview looking back over the early days of my career:

Part 1  From Fanzines To LEGION OF SUPER-HEROES & Beyond

Part 2  Looking Back At LEGION OF SUPER-HEROES, DC Implosion, More

If you read the lengthy series, you will essentially have experienced a day of my university lectures. Don’t fall asleep, there will be a test: find the place where a one word transcription error credited me with working on a series I never did a complete issue script for.

Jon B. Cooke interviewed me for an article in the latest issue of Comic Book Creator!

If your local retailer doesn’t carry this cool magazine, you can buy a copy HERE. 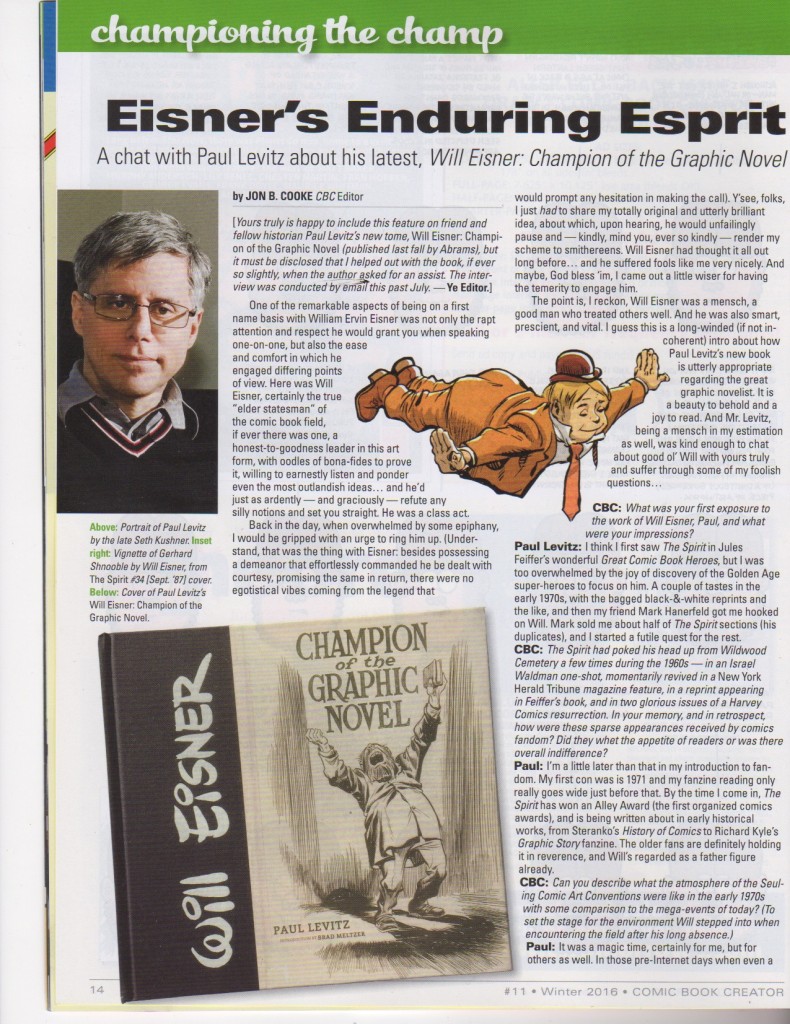 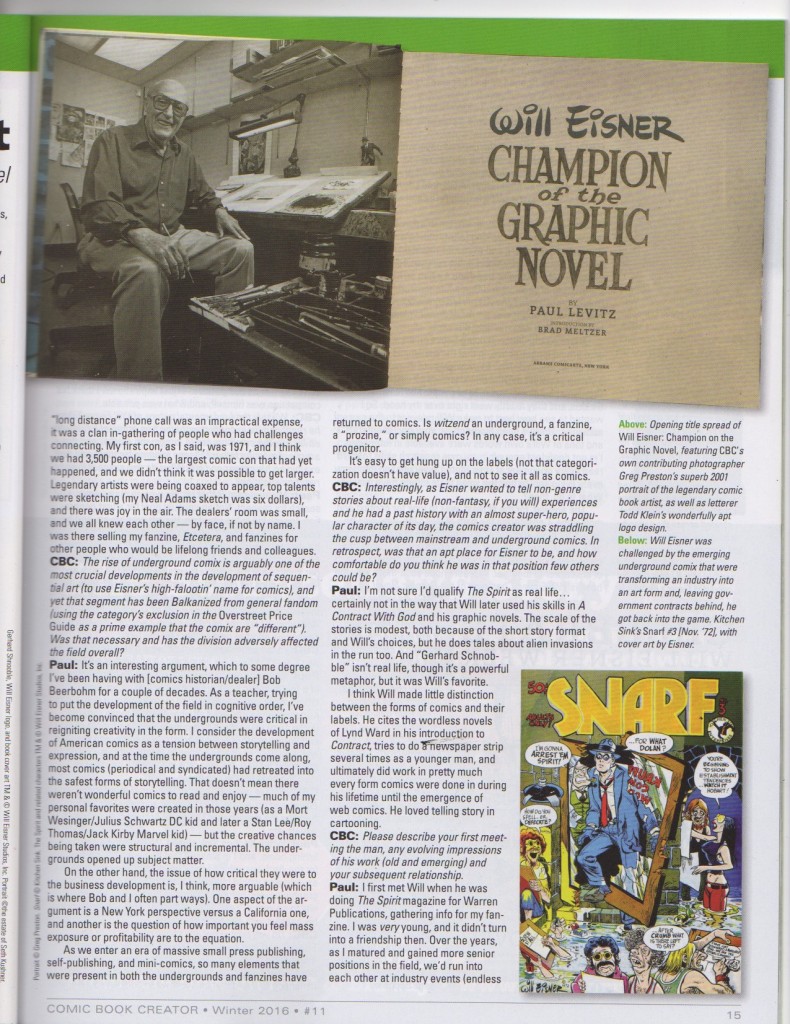 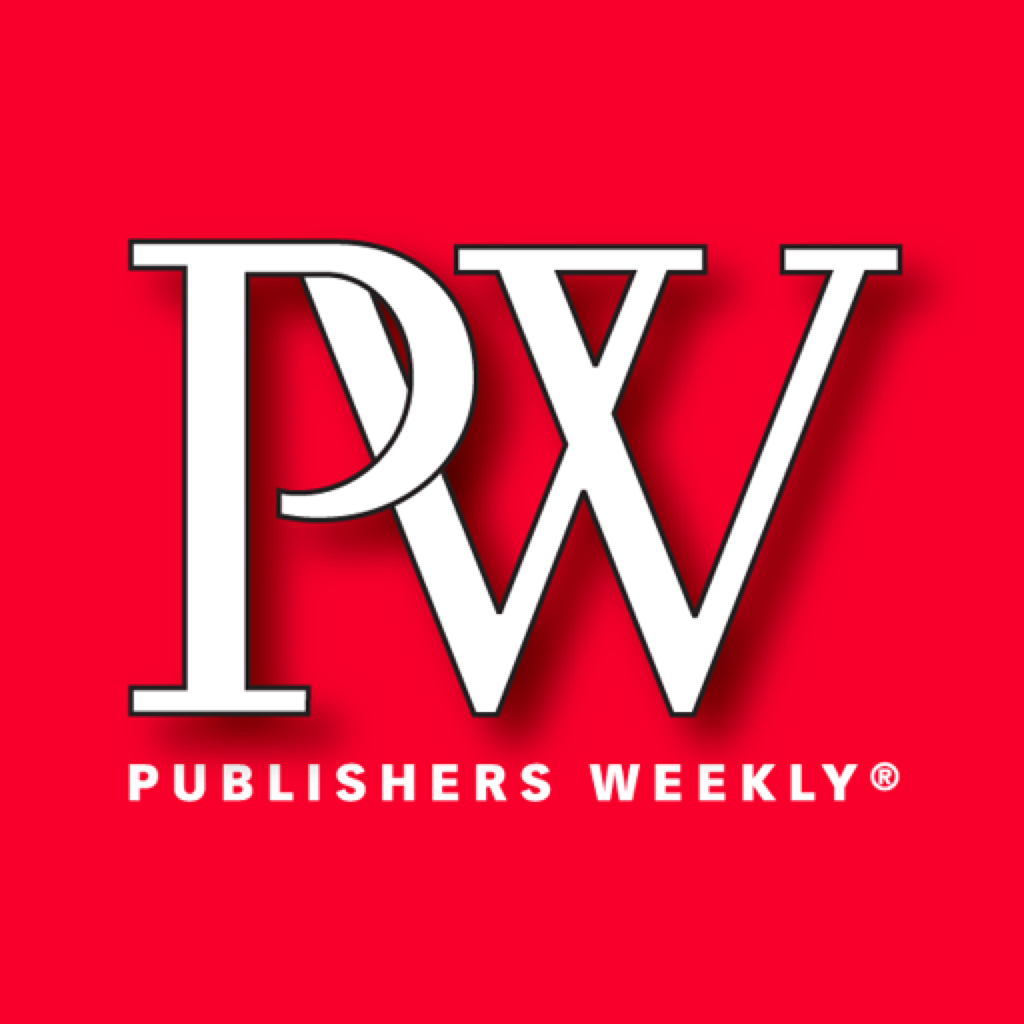 Will Eisner: Champion of the Graphic Novel and my career:

Raina Telgemeier, Todd McFarlane, Denis Kitchen and me in conversation on Will Eisner :

FROM BLEEDING COOL: Paul Levitz is returning to writing comics now that his tenure at DC Comics has come to a close, and while he’ll continue teaching, which takes a fair amount of his time and attention, this represents a new phase for him creatively. Last week we saw the arrival of Doctor Fate from DC, and readers might have wondered what’s coming up for Levitz. We’re happy to announce today that his next project, appearing in December 2015 will be the detective, occult series Brooklyn Blood. Serialized over as much as a year and a half in as many as 15 installments in the anthology Dark Horse Presents, the story will be illustrated by Tim Hamilton and be set, as the title suggests, in Levitz’s native Brooklyn.

Brooklyn Blood will feature Irish cop and Iraq/Afghanistan war vet Billy O’Connor and a fellow female Arabic-American detective Nadira Hasan. The series will focus on experiences that will challenge their perceptions of the explained and unexplained, all turning on Brooklyn’s history, the mysteries of which initially inspired Levitz to create the story.

We’re happy to have Paul Levitz here today to talk about this phase of his career, the impetus behind Brooklyn Blood, elements of genre, and a generational shift in comics which he finds very promising indeed. 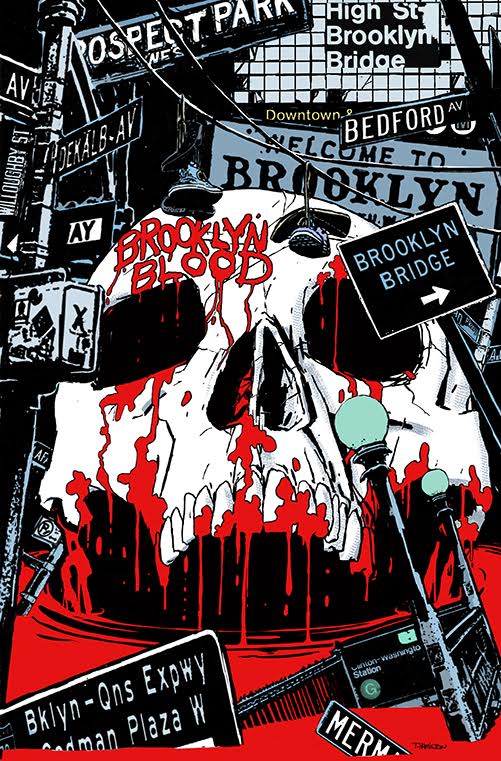 Over his decades at DC Comics, Paul Levitz has gone from writer to publisher and back again. And while he’s been contributing stories to the DC Universe since the launch of the New 52, he feels a change in the incoming “Doctor Fate.”

“I think it’s the best thing I’ve done since I came back to writing,” Levtiz told CBR News about the new series launching this Wednesday, June 17, with artist Sonny Liew. The series reenvisions the frequently white, square-jawed Golden Age hero Kent Nelson as Khalid Nassour — an Egyptian-American medical student torn not only by two cultures but also by the powers of Nabu that are thrust upon him as the gods imperil earth. 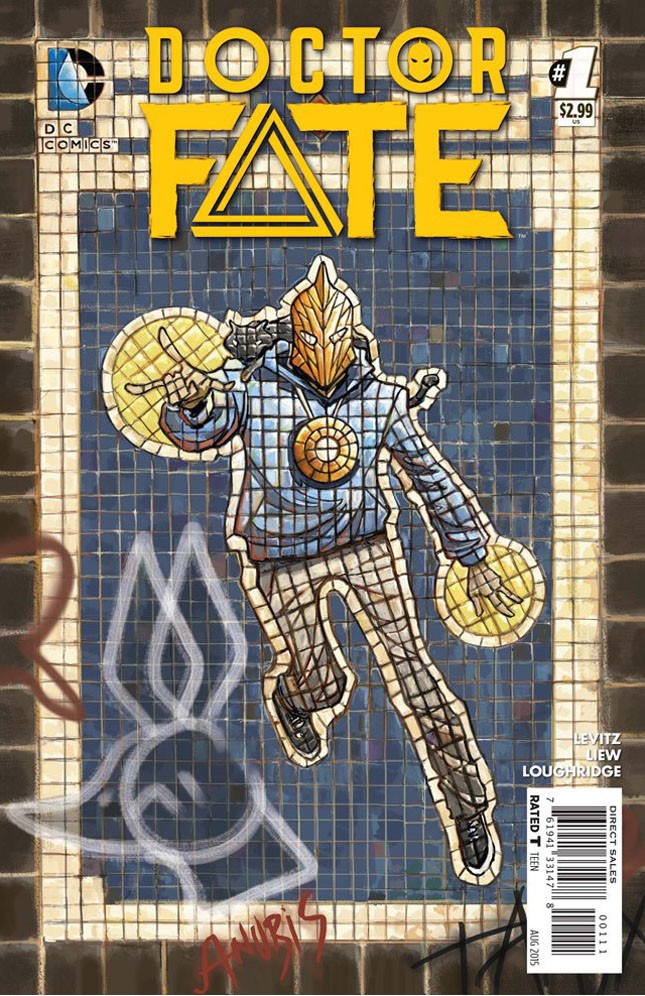 For Paul Levitz, the goal of his Convergence: World’s Finest issues is to give a fitting farewell and tribute to the characters he’s writing — in the vein of Alan Moore’s Whatever Happened to the Man of Steel?

Keeping Moore’s legendary Superman story in mind, Levitz found an innovative way to bid farewell to the Seven Soldiers of Victory — by framing their Convergence story in a report being “drawn” and “written” by Golden Age cartoon character Scribbly Jibbet.

In Conversation With Junot Diaz

At M.I.T. a while back, I spent a lovely evening talking with the incredibly smart and talented Junot Diaz, which is now available for your listening pleasure as a podcast: “Paul Levitz, in Conversation With Junot Diaz” — LISTEN

When news broke that Paul Levitz, the former DC president and publisher, has been added to the board of directors at the Los Angeles-based BOOM! Studios, a lot of fans wondered what that meant for his current DC comic Worlds’ Finest — and whether the long-time New Yorker was moving.

Never fear, Levitz has told Newsarama — his current work will continue unhindered, and his commitment to New York is unchanged.