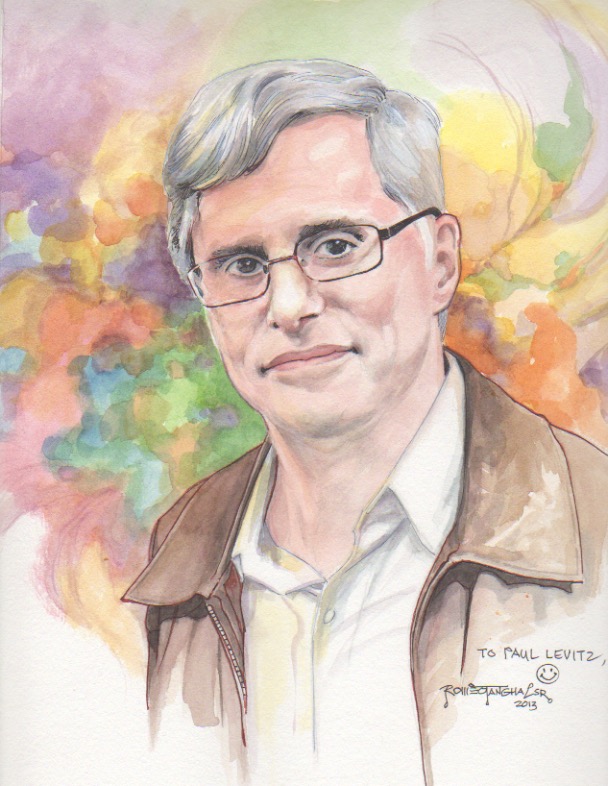 Dear Mr. Levitz, Was re-reading the Great Darkness Saga and just noticed before we even see the Superman Servant of Darkness, Legion Annual #1 showed one that was “crushed by a misguided hunk of metal”….which previous character was this initial Servant of Darkness based upon? 20. January 2023

A question that’s come up on the JSA FB page recently. Were the JSA stories in Adventure 463 and 464 originally intended for All-Star 76? The fact they add up to 25 pages made us wonder. Thanks for all you do! 20. January 2023

I don’t think so, my memory is that only the one issue was left over from ALL-STAR and chopped up into ADVENTURE>

Hi Paul I’m a great admirer of your work and contributions to our hobby over the decades, my question is has there ever been a crossroads in your professional life where looking back now in hindsight you may have gone down a different road ? 5. November 2022

Not hindsight, but there were a few career opportunities that I either turned down or didn’t develop that might have led me away from comics into the world of animation or once to Court TV.  No complaints about not taking those paths.

Hi Paul. As a side note as a contemporary in age I am envious of your career as you seem to have merged your hobby, passion and professional life and continue to do so. Like you I fondly recall the Roy Thomas era of the Avengers ( including the introduction of such characters as Ultron, New Masters of Evil, Vision, Yellowjacket, Valkyrie, Red Wolf et al) and look forward to your interpretation of the Avengers!. My question is that I understand that you have acquired a substantial number of comic books. Over the last 50 plus years I similarly have accumulated a vast number of books. How have you preserved and organized such accumulation. In various posts I have seen references to a binding and a filing system. I would love to hear in detail your process in preserving and the organization of your collection. Thanks and continued good fortune 16. October 2022

So my approach was fundamentally financially unsound but full of personal delight.  My collection is all bound into hardcover volumes, mostly of a dozen to sixteen issues of each title.  This makes them easy to read, but far harder to sell, though I’ve never had the temptation to do so.  (We’ll see if my kids end up donating the whole thing or holding onto it.)  The volumes are stored on moveable libary shelving from a company called Spacesaver  (https://www.spacesaver.com/products/high-density-mobile-shelving/) which Maggie thompson recommended to me.  I rearrange things from time to time, but generally have kept collections separate by publisher, and alphabetical within them, with book-format versions shelved somehwat separately.

Hello and sorry for the inconvenience. Romeo Tanghal told me that you could clarify this doubt for me. My name is Paolo Pompa eand I’m a Italian collector of original comic art. I recently purchased a sequence of original plates on Comicconnect. The description does not clarify whether the story was ever published. Can you help me clarify? Dick Ayers pencils/Romeo Tanghal inks; partial story; pgs 7-11; 1979; image size 10″ x 15″ ea. Nice 5 page sequence by Ayers and Tanghal, from a possibly unpublished Code Name: Gravedigger story, Men Of War was cancelled with issue #26 and it’s unclear if this story was ever used. Pen and ink. Art is in excellent condition. Signed by Tanghal on pages 8-11. 27. July 2022

Without seeing the pages, I can’t guess.  There was SHOWCASE edition of MEN OF WAR that I think included all the finished Gravedigger stories, so I’d suggest you track that down and see if there’s a match?

Hey Paul, I’m a huge fan of your work. I’m an aspiring writer and artist making a comic book. With the hopes of making a superhero universe. Do you have any tips for the journey? 2. June 2022

Try writing smaller stories first. Zelazny had an approach that when he was going to do a novel in a new universe, he’d often do a short story of a character in that universe first–even if it wasn’t a character he’d use in the novel. Building a whole universe is a GIANT task, and no writer has successfully built a whole new super hero universe solo, maybe Jim Shooter coming the closest at Valiant?

Hello Mr. Levitz, I have been rereading the Who’s Who series because of the Omnibus editions and I have a few questions: 1) Before you leaving the Legion, did you have any plan for the Legion of Subs II like a Special, a Limited Series or some arc/subplot in the main Legion series? I ask this because in Who’s Who in the Legion, there were entries from some Academy students as Westerner and Mandalla (although no entry for longer-standing student Urk!!!) and this has led me to think if they were included because you had plans to use them in some future story with the Subs II. 2) About the Legion Academy entry in Who’s Who in the DC Universe XIII and the Legion Academy splash page in Who’s Who in the Legion #6: IMO the penciller only looked for 1 reference, the original Who’s Who entry. So he draws exactly the same students, minus “deceased” Laurel Kent, and excludes newer students! Can you confirm that the floating device isn’t a student but a communication device used by Tellus and so it’s a mistake calling it a student? In Legion #304, we have Tellus’ 1st appearance (see Who’s Who in the Legion #6), although he isn’t seen directly in the story. So he should presumably be the mentioned student in the conversation between Lamprey and Nightwing (p.15) and presumably, he uses the floating device as a way to attend classes. So he’s talking to the rest of the class via the device in p.2. If the device was really a student, he could have appeared in later stories after Tellus left the Academy and he didn’t. Also he would have appeared in the Legion poster by Giffen and perhaps even had his own individual entry in Who’s Who in the Legion, although IMO some character were missing: Terrus from LSV, Urk from Legion Academy,… 2. June 2022

Lots of questions, not too many answers. No specific plans for other stories.

I think your logic on the floating device seems sound, though I have no memory of it.

No page for Urk…ah well…

I became a long-time Legion fan when I was ten due to your “Wedding of Saturn Girl and Lightning Lad” and the final Earthwar issue — thanks for all the Legion enjoyment over the years. You’ve worked in-depth writing Legion in multiple different time periods. Is there still a particular Legion story or storyline that you didn’t get to do that you would have liked to? 2. June 2022

Not really. At the time the last series was split off from LEGION LOST with little warning, I lost the chance to do some reveals of TYROC that I had in mind, but there wasn’t a specific story. I tended to make up my story ideas as the need arose, rather than banking them.

Page 1 of 8 1 2 3 4 5 6 7 8 ›
Leave a Reply Cancel Reply
Login to Paul Levitz
Reset Password
Enter the username or e-mail you used in your profile. A password reset link will be sent to you by email.